In these anxious times, we need to feel good about something.

Sometimes we need a jolt to snap us out of a funk. It‘s been a long time since I smiled, laughed, or felt happy about something. Like many, my soul craved a defibrillating reboot. I discovered a shocking way to inject optimism back into my life through a TV show  called Ted Lasso on Apple TV+.

The show follows the journey of American college football coach Ted Lasso played by actor Jason Sudeikis. Despite knowing absolutely nothing about soccer, Ted has been hired to coach a fictional English Premier soccer (football) team, AFC Richmond. Ted’s job is to elevate the team and prevent relegation. We question his abilities when he describes the goalkeeper as “ the guy with the Mickey Mouse Hands.”

Why would a Premier League team hire an American football coach who knows nothing about the sport? Rebecca Welton, the new owner, is conspiring to undermine the team. She is seeking retribution against her billionaire ex-husband, the former owner who loved the team more than anything else.

The problem is Ted is an exceptionally likable person and a highly effective coach. His thick accent and extended use of southern colloquialisms give an initial impression of a county bumkin. We quickly learn there is more to Ted than our first impression. He is well-read, highly intelligent, inquisitive, and eternally curious about people.

Ted Lasso sees his players as human beings, not just talent. He wants to understand who they are to find the best ways to motivate and help them improve on the field and become better people. When team manager Nate is being bullied, Ted knows he can intervene but uses the moment to motivate team Captain Roy Kent to demonstrate his leadership.

Coach Ted radiates positive energy and enthusiasm. His quick wit and striking ability to read people, coupled with his effusive optimism, win over the locker room, the AFC Richmond fans, and the owners.

Ted Lasso captured the hearts and minds of my family as well. We restarted our neglected family movie night. My wife, daughters, and two dogs wrapped ourselves in blankets and cuddled up on the couch. We hoped the show would be fun, but we were surprised to find a reenergizing home remedy for the pandemic blues.

We laughed as striker Dani Rojas skips around the field shouting, “football is life.” We cheered when the young Sam Obisanya hit a game-winning shot. We booed when the egotistical superstar Jamie Tart struts around the locker room. Our hearts melted as the aging Roy Kent realizes his best days on the field are in the past but finds a new love. And all of us cried when Ted accepted the truth of his failing marriage.

The colorful British English opened up some “opportunities” for discussion with my preteens. “Wanker” is the nickname the thousands of AFC Richmond fans chanted for Ted. As I debated how to explain the phrase, Coach Ted explained to his son; a wanker is “a man who likes to be alone with his thoughts.”

The show Ted Lasso is not about soccer.

It is the story of optimism. The show radiates it. Our world is facing challenging times. Hope is what we are missing. We need to see the world through Ted’s eyes. Imagine the life we could lead if we saw every moment as an opportunity.

Coach Ted encourages each of us to look on the bright side. There is always a silver lining. When the world knocks us flat on our backs, we get to decide what happens when we get up. Photo by pouria oskuie on Unsplash

Ted Lasso reminds us to stay strong in the face of adversity. A set back is simply a learning experience. After a tough loss, he tells the players, “You know what the happiest animal in the world is? It’s a goldfish. It’s got a 10-second memory. Be a goldfish.”

I want to be a goldfish.

A mistake is not a failure; it’s a chance to get better. Ted wants us to celebrate an error as the new-found knowledge of how not to do something. Every challenge we face is a chance to grow and become a better version of ourselves.

The world needs more hope. We all need to view our current challenges as mere bumps on the road on the way to success.

We all need a little Ted Lasso in our life to remind us that our best days are ahead.

Thank you the innovation for publishing this article on Medium. 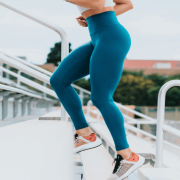 Avoid This Mistake or Your New Year’s Resolution Will Fail Your Morning Routine Can Change Your Life Tomorrow Children Teach Parents the Value of being Fully Present at Home I Tried Jogging Without Glasses and It Changed Everything The Quarantine 15: Who Else Is Fighting It and How Can We Fix It?

How to Make a New Year’s Resolution That Works

Iron-Deficiency Anemia; Why It Happens and What to Do About It
Scroll to top