It is a hysteroscopic (very small camera/telescope that goes into the uterus) tool used to remove fibroids and/or polyps without having to cut or remove any part of the uterus. Also, it’s an outpatient procedure, so you can go home the same day.

So, what are fibroids? 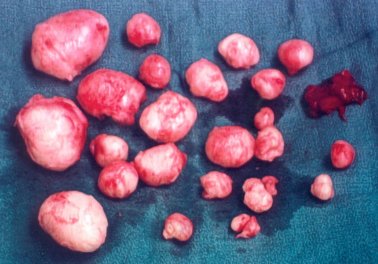 These are very common non-cancerous tissue growths in the uterus. The size and number of these fibroids is variable… can be a single fibroid or multiple fibroids, and can range from very small to the size of a cantaloupe. They can be found on a stalk inside or outside the uterus. They can also be found in any layer of the uterus: in the muscle wall (intramural), under the outer layer (subserosal), or just below the inner lining of the uterus (submucosal).

So, what are polyps? These are small protrusions of the uterine lining (endometrium) that grow, become fragile, and start to bleed. Here is a picture of two polyps and the Symphion device.

So, are polypectomies and myomectomies safe? Effective?

With a hysteroscopic approach or with Symphion, the complication rate is less than 1%. The procedure is 90% effective in reducing heavy bleeding and recurrence rates at 2 years are less than 10% for fibroids and less than 3% for polyps.

What are the steps of the procedure?

What’s the recovery like and what can I expect after the Symphion procedure?

Some women have mild cramping, for which most only need over the counter pain medicine. Most women are back to normal activities within a day or two. You are unlikely to have any complications, but call your doctor immediately if you have any of the following:

When will I know how well the procedure worked?

This varies for every woman, but plan to give your body approximately 3 months to fully heal. By then you and your doctor should be able to tell what your cycles are going to be like.