The third trimester. She counts down the days until her little one arrives. At her 32-week prenatal appointment, the Obgyn throws her a curveball. The doctor recommends the Tdap vaccine and a flu shot. Pregnancy places her at high risk, and the vaccines will pass protective immunity to her baby. But her family and Facebook Mom’s group adamantly oppose vaccination.

What should she do?

Both influenza and Tdap vaccines reduce the risk to pregnant women protect babies who are too young to get vaccinated. These vaccines transfer antibodies through the placenta from the mom to baby proving protection until they are old enough to receive their own vaccinations.

The CDC analyzed eight years of surveillance data (2010–2018) to determine influenza and pertussis’s impact on pregnant women and their babies. The MMWR Burden and Prevention of Influenza and Pertussis Among Pregnant Women and Infants evaluated 2097 pregnant women and infants in an internet survey published in October 2019.

Influenza is a common seasonal respiratory viral infection. The virus spreads via respiratory droplets from person-to-person. Droplets spread through coughing, sneezing, and breathing. Particles get on our clothes and hands. We then pass the virus through handshakes, hugging, kissing, and other close human contacts.

The Advisory Committee on Immunization Practices (ACIP) recommends all pregnant women receive an annual flu shot regardless of gestational age. Influenza vaccination is critically important to preventing infection. The best prevention is the flu shot. If you have not received your annual flu vaccine, you should do so now.

The CDC states that flu shots reduce the risk of influenza-associated hospitalization by an average of 40%.

The MMWR data from 2010–1018 show pregnant women accounted for approximately one-third of all influenza-associated hospitalizations.

Impact of seasonal flu on infants

Influenza is also dangerous for babies. The MMWR data demonstrated infants less than six months old who have influenza are hospitalized more often and have the highest risk of death. One hundred infants under the age of six months died from a laboratory-confirmed influenza-associated illness.

While the majority of influenza-infected children recover after about seven days, some children suffer serious adverse effects. Complications such as pneumonia and sepsis can be life-threatening. Influenza can also invade the tissues of the heart, causing a dangerous condition called myocarditis. Neurologic complications from influenza range from febrile seizures to viral infections of the brain called encephalopathy.

The best way to protect infants from the flu is to vaccinate the adults who will be around the baby and for mom to get vaccinated during pregnancy. Giving pregnant women a flu shot reduces the risk of infant influenza-associated hospitalization by an average of 72%.

The crossover antibodies help protect the infant until they are old enough to get their own flu vaccine. Children qualify for seasonal flu shots after six months of age. 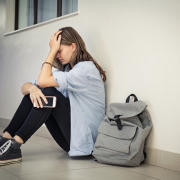 Teen Dating Violence Is a Problem, but Texas Governor Vetos Bill to Stop It

Pregnant or Breastfeeding Women Have a High Antibody Response After Vaccination Vaccine Refusal Will End When Businesses Start Telling People No Robotic Hysterectomy; What You Need to Know and How to Prepare Uterine Fibroid Embolization; A Treatment You May Not Know About

Irregular Menstrual Bleeding? A Hysteroscopic Polypectomy May Be the Soluti...
Scroll to top